We just completed Day 2 of Music Olympics Camp so I thought I would just sneak in a few pictures and give you some game ideas. Maybe they will help you with a group class idea for your "kick-off" this fall.

The premises of the camp is to drill them in note identification, rhythm, musical terms and recognizing simple melodic and harmonic intervals. We've been working on those areas using different games/events. On Friday we have the actual Olympic Games where their parents come and watch.

I have two teams of 3 kids for a total of 6 kids this week - one girl and 5 boys so you can imagine the activity level! On the first day, each team made a team flag and came up with their own team "national anthem" (After all, we have to have a song to sing if they make it to the podium during the medal ceremony!). Then we were on to the games... 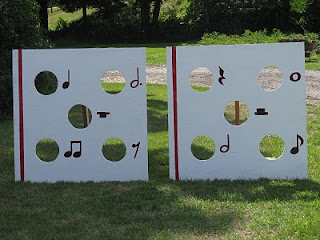 The first one I named Rhythm Toss. I took a piece of plywood and cut it in half (ok, so my husband did the cutting...) and then put 5 holes about 8" round in each one. A bit of paint and some notes/rests and the boards were ready to go. My husband also rigged a way for them to stand up. I wanted to use these boards with bean bags and have the kids "build" measures depending upon which hole they were able to get their bean bag in. The goal was to be the first team to build at least 4 measures. The catch was that they couldn't have any beats/rests left over. If they did, they had to build another measure! They absolutely loved this game! They would get so excited when a team member would get just the note they needed. It also helped to reinforce the number of beats each note/rest has.

Because the next event was to drill them in musical terms, I added a twist to this game by having them identify a term before they were allowed to throw a bean bag. This helped when we got to this game... 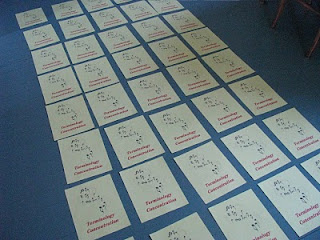 Terminology Concentration! This is a jumbo memory game, but instead of finding two similar terms, they had to match up the term with it's own definition. There are 20 terms and 20 definitions so I put them together in rows 8x5. Each person had the chance to turn over two cards to try a get a match, but their team could help. (If anyone is interested in a pdf of all the cards and definitions, let me know and I'll post them on my website.) 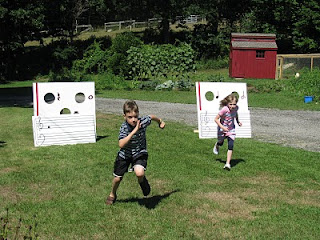 I put together cards with words using the musical alphabet and each team had to race down and place a note on the staff before running to tag the next team member who would add the second note or "letter" to eventually build the entire word. We did this on the first day and I actually found that the kids had a bit of confusion building the word from left to right. Several times the kids would just put the note on the staff above another note rather than to the right of it. I decided to turn the problem into a discussion about harmonic versus melodic. It solved the problem and also helped set us up for our Interval event which was next!
Email ThisBlogThis!Share to TwitterShare to FacebookShare to Pinterest

What cool games!!! I LOVE your magnetic staff board. I have a mini-sized one, but a big one is now on my "to-do" list. Now I want to make rhythm toss boards, too!

I really like that your games are so active. They'll be great to use during the school year for kids who have been stuck sitting all day by the time they get to lessons!

Thanks, Jennifer! I can't tell you how much fun the kids are having. The best part though is how MUCH they are learning and retaining! They are so excited about the Olympic competition on Friday!

What fabulous games! Thanks so much for sharing! I have never done group lessons or a camp before, but will definitely remember these great ideas for the future. Thanks!

Thanks for sharing these ideas. I love the rhythm toss. Someday.....when my kids are older and I can grow my studio I'd love to host a piano carnival. This would be perfect!

Thanks Jenny & Heidi! We are having SO much fun this week. I will share some more games soon. I'm thrilled they are giving all of you ideas!